Why Set Up an Office in Singapore? 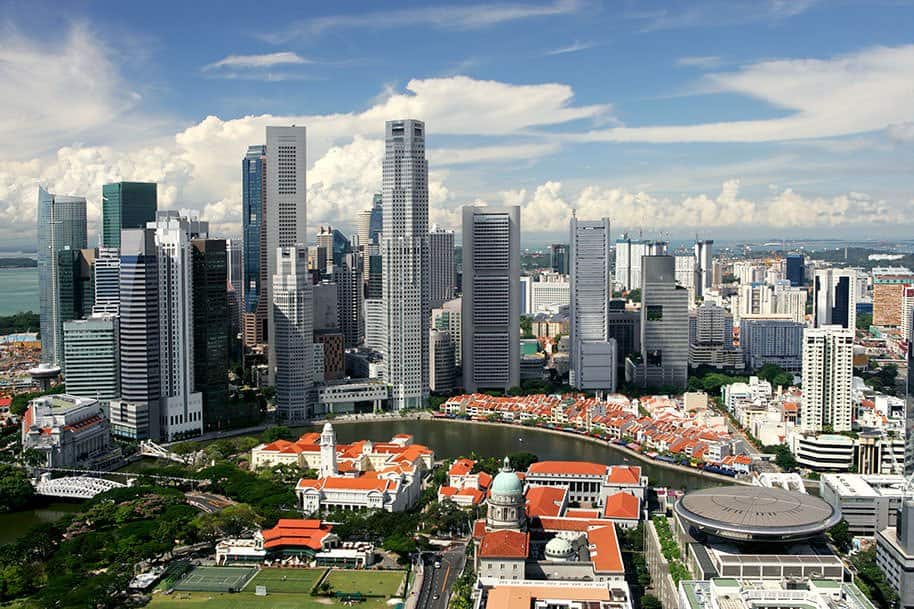 Why Set Up an Office in Singapore?

With the world’s rapid economic growth, a large number of potential entrepreneurs are establishing businesses abroad. Singapore is one of the top choices of many investors & entrepreneurs around the world.

The reasons behind this are:

On the basis of these factors, Singapore proves to be a popular destination for establishing businesses. It is a prime location where cultures of the East and West meet together. It provides a link to nearly all of the major Asian markets. Singapore is a commercial hub that facilitates business executives to be connected globally. Singapore being located at a strategic location, offers a pro-business environment, acceptable tax regime, fair immigration policies, a hardworking and valuable workforce, quality infrastructure, a high quality of living, a supportive and stable government along with an efficient legal system.

Below listed are some of the vital benefits of doing business in Singapore. If you are a business executive trying to be convinced “Why Singapore?” this article could help you make a rational decision.

Singapore is located at the center of ASEAN (Association of South East Asian Nations). It is because of this strategic location that Singapore has access to widespread air and sea connections enabling your business to access a huge population within seven hours from any port. Promoting inter-regional and intra-regional trade, it proves to be a vital hub for professional exchange. Singapore’s port is considered amongst the busiest in the world, classed as a leading International Maritime Centre.

Singapore’s Changi Airport serves over 15 million passengers annually connecting to 180 cities with its 80 airlines. It also has several accolades and awards to its name consistently. It has been named as the ‘Best Airport in the World’ for 20 years of its operation due to its efficiency and quality service. Therefore, Singapore provides easy access to all major Asian markets giving your business a major benefit geographically.

Singapore’s pro-business environment attracts substantial foreign direct investments and is popular among entrepreneurs. It provides one with a special and ‘business-focused’ environment where one can convert his/her ideas into real profitably businesses with relative ease. On average, it takes about 1-2 days to setup a business in Singapore. Assistance is provided at every phase of the process by various government bodies. Establishing a business can not be easier than any other place in the world.

Tax is one of the most important things that entrepreneurs consider before locating their business. Locating in Singapore gives entrepreneurs the advantage to bear low personal and corporate tax rates. Personal income tax has a rank system that begins from 3.5% and reaches 20% for people earning above S$320,000.

Likewise, the corporate tax rate is below 9% on profits up to S$300,000 for Singaporean private limited companies, where the highest rate is 18% for annual profits exceeding S$300,000. With effect from YA 2010, corporate tax rates will be reduced from 18% to 17% to avoid any disincentive among Singaporean business people. In addition, there is no capital gains tax. Having a ‘singe-tier’ tax policy in Singapore enables dividends to be distributed to shareholders tax-free. The Singaporean government has also initiated tax incentives to encourage foreign direct investment and expansion of the targeted industries in Singapore.

Aiming to incline towards indirect taxes to maintain a set level of incentive for entrepreneurs, the government has adopted a Goods and Services Tax (GST). Although the GST is 7% in Singapore, it still remains one of those countries having low rates of GST.

A number of programs have been initiated by the Singapore government and the private sector to help newly formed companies and multinationals in Singapore improve efficiency, build up their potentials, and capitalize on new opportunities in front of them. Some programs facilitate domestic industries and newly-formed businesses with their start-up costs, while others cater to the needs of multinationals. You can benefit from all sorts of loans, grants, equity financing, and tax rebates/ incentives.

Singapore’s liberal Immigration policy helps foreigners to migrate to Singapore, and establish their businesses here if desired. For business entrepreneurs who are looking to run their business in Singapore, or hire professionals from abroad, the government helps them to attain Singapore work visa provisions.

To attract valuable human resources, this liberal immigration policy is used to sustain economic growth prevailing in the country. Singapore has a prime motive to transform itself into the “talent capital’ of the global economy. To achieve this, Singapore has liberalized its immigration policy, making it easier for overseas professionals to gain a Permanent Residence (PR) status in the country.

Family members of the high skilled labor force are allowed where they are exempted from the quota system.

Professionals from abroad are encouraged to become PRs. The government has ensured that PRs also have the benefit of those things that normal citizens have access to.

Singapore is famous for enabling businesses to manage their IP assets. Singapore is also ranked top in Asia for IP Protection by The World Economic Forum (WEF), the Political Economic Risk Consultancy (PERC), and the Institute for Management Development (IMD) for three consecutive years (2002 – 2004).

Singapore is a part of many IP treaties & conventions which include the Berne Convention, World Intellectual Property Organization, Paris Convention, Madrid Protocol, and more. This way a business can file or register trademarks globally while residing in Singapore.

The Political and Economic Risk Consultancy (PERC) has declared Singapore as the country with the minimum risks in Asia for 2007 statistics. Singapore has been ranked as the country with the finest judicial system in the whole of the Asian subcontinent subsequent to Hong Kong’s system. Singapore’s legal system is valued by investors and entrepreneurs where its key qualities include transparency, efficiency, and a legal system that is intact due to its equity. There are clear rules & regulations relating to business-related aspects like the workforce, trade, and ways of operating your business. Subjects like the number of working hours, production, taxation, and minimum wages, have laws and legislations, rendering it as a beneficial place for executives to establish and operate their businesses.

Developments in the law of Singapore reflect the importance that is given in recognizing and accommodating existing international business and commercial dealings. To settle business disputes in a quick and cost-effective way, there exist several Dispute Resolution channels to help. As a result, Mediation and Arbitration procedures are employed to settle business disputes. Some of which are listed below.

A supportive political system is vital for businesses to grow and flourish. Singapore’s political system follows a pro-business approach by passing laws, setting priorities and regulations accordingly. Singapore’s government is stable and organized, where its goal is to place Singapore among top industrial countries.

The government stresses to attain a high level of efficiency and perfection at every stage of life. Transparent, and full of integrity, the Singapore government enables entrepreneurs to establish their businesses. They can operate freely without having any concerns relating to bureaucracy and corruption issues. The government promptly responds to any economic crisis that comes about. It ensures that its policies are in-line with the current practices and the economic condition prevailing in the country. Precautionary and protective and measures are swiftly taken relating to non-economic crisis issues.

Singapore has been rated strongly for government success on various grounds (quality of policy formulation and implementation), regulatory quality and measures to deal with corruption as stated in the World Bank’s Report.

Singapore has to its name a productive, skilled, and a valuable labor force– a key element for business success. The labor force is educated and trained as the country stresses on attaining knowledge. Singapore’s work-force is known for its high level of education, technical expertise, and high productivity. The Singapore labor force consists of both local and immigrant professionals experiencing cultural overlaps and exchanging broad knowledge, technical expertise and a great amount of experience and diversity.

Singapore being the top convention nation in the Asian continent has hosted some of the world’s most important business events like: The World Economic Forum 2005 and the 2006 Board of Governors AGM of the IMF and World Bank.

Singapore employs technological aspects to build efficiency and maintain its sustainable growth rates. Nearly the entire population has a broadband network access at their disposal.

Quality of Labor in Singapore

According to the Global Information Technology Report of 2005-2006, Singapore ranks the second world’s most ‘Network Ready” country meaning that it has a great diversity of labor.

The Free Trade Agreements (FTAs) facilitate Singapore by connecting the country with other economies of the world and their fresh markets. These trade agreements benefit our businesses by providing concessions in tariffs, special entry into particular regions, quicker access to markets and the protection of Intellectual property. The country has various agreements with its trading partners that help the business by lessening the tax lumber on the businesses in Singapore. Singapore’s trading partners include China, Switzerland, USA, Panama, Australia, Iceland, India, Japan, Korea, Norway, Jordan, Chile and many others.

35 Investment Guarantee Agreements (IGA) have been signed by Singapore to safeguard Singaporean businesses against non-financial risks faced in other countries. Singapore, being a part of Schemes of Preferences, enables Singaporean-based businesses to facilitate free trade as the Scheme helps protectionist measures to be reduced. They are formed among countries who agree to give special trade tariffs to member nations.

Professionals who come from other countries do work abroad but also bring their family in with them. The quality of life in Singapore is one of those key things that people find attractive. The social atmosphere, cost of accommodation, education, health, etc. are some of the few factors immigrants consider. Singapore ranks high on the basis of these factors. Singapore residents beyond doubt appreciate the hygienic, secure and competent society. Singapore wishes to help those who wish to move here to establish their business or for career startups, wishing to have their family travel and live with them.

Singapore stands ahead among many of its other Asian fellows. The ECA International, 2006 has ranked it as the best place to reside for Asian emigrants. Mercer Human Resource Consulting, 2005-2006, and 2008 has also placed it in the first place as the best place to work, play and live in.

It is one of the top five cities in Asia-Pacific where a person feels personally secure as reported by the Mercer HR Consulting, 2008. Singapore provides the best quality of life in all of Asia and ranks and the second largest portal for shopping, nightlife and dining by Global Country Brand Index in 2006.