Asia Square is a twin-tower mixed-use development that will comprise 2 million square feet of grade A office space, a 280-room five-star hotel, 60,000 square feet (5,600 m2) of retail space and 'The Cube', a 100,000-square-foot (9,300 m2) open public space used for networking or relaxing with a regular programme of exhibitions and performances.

The development is currently under construction and will be completed by 2011/2013. Citibank Singapore has decided to move all of their front office/client facing staff to Asia Square with the first office slated to be occupied in 2011 Quarter 3. As a result, Citibank's existing offices in Centennial Towers, Millenia Towers, Capital Square would be vacated. All the back office staff from these existing facilities would be shifted to Changi to save cost while the front office staff occupies Asia Square. Similar moves have been done by Deutsche Bank and Barclays. With this, Asia Square is poised to join the ranks of Marina Bay Financial Centre buildings to truly define Marina Bay as the financial district in the next decade. 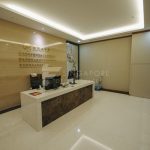